We have the most EXCITING NEWS!
We honestly can’t quite believe it ourselves.

The Incredible Brian Friedman’s first ever Workshop in DUBAI!

This is definitely a once in a lifetime opportunity to learn from the biggest and best in the industry! The workshop will be an intermediate advanced standard and you will have to pickup complicated choreography quickly! (You can always ask your dance teacher if your not sure if it will suit you!🌟)

‘Friedman has directed and/or choreographed some of the most popular and groundbreaking music videos and performances such as Britney Spears “Toxic” and “Slave 4 U,” “My Love Is Like Wo” by Mya, “The One” by Prince, *NSYNC’s “Dirty Pop,” and many more for such artists as Justin Bieber, Beyonce, Mariah Carey, Usher, Pink, Ne-Yo, Brittany Murphy, Christina Aguilera, Nicole Scherzinger, The Wanted, Carly Rae Jepsen, Karmin and Rihanna.

Friedman entered millions of homes as a judge and choreographer on the FOX hit show So You Think You Can Dance. Simon Cowell brought Brian to London for The X Factor. Cowell created a brand new on-camera position specifically for Brian as creative director. Friedman has served as creative director and choreographer for multiple seasons of The X Factor UK, as well as on other reality competition shows such as American Idol, The Voice Australia, and The X Factor (US version).

He also directed, choreographed and danced on Dancing with the Stars. Brian was a consulting producer for several years on America’s #1 summer hit show, America’s Got Talent and The US version of The X Factor. Additionally, Friedman has served as creative director for performances on shows such as Ellen, The Tonight Show, The View, Good Morning America, as well as for numerous top-tier artists’ award show performances.

Friedman’s dance training began at 11 in his hometown of Scottsdale, Arizona. He soon starred in Newsies and “Kids Incorporated,” and owned his own dance studio by the age of 16. As a young dancer, Friedman worked with such artists as Michael Jackson, Janet Jackson, George Michael, Paula Abdul, Celine Dion, Melissa Etheridge, and Patti LaBelle. Friedman has received The Industry Voice Award for Best Choreography in a music video for Britney Spears “Till The World Ends” as well as having been nominated for 4 MTV Video Music Awards, 2 Music Video Production Awards and 5 American Choreography Awards.’

Bookings can be made at: https://new-dimension.ae/book-now/
Summer of 2020 is starting to look better already 🔥
🔥❤️🔥 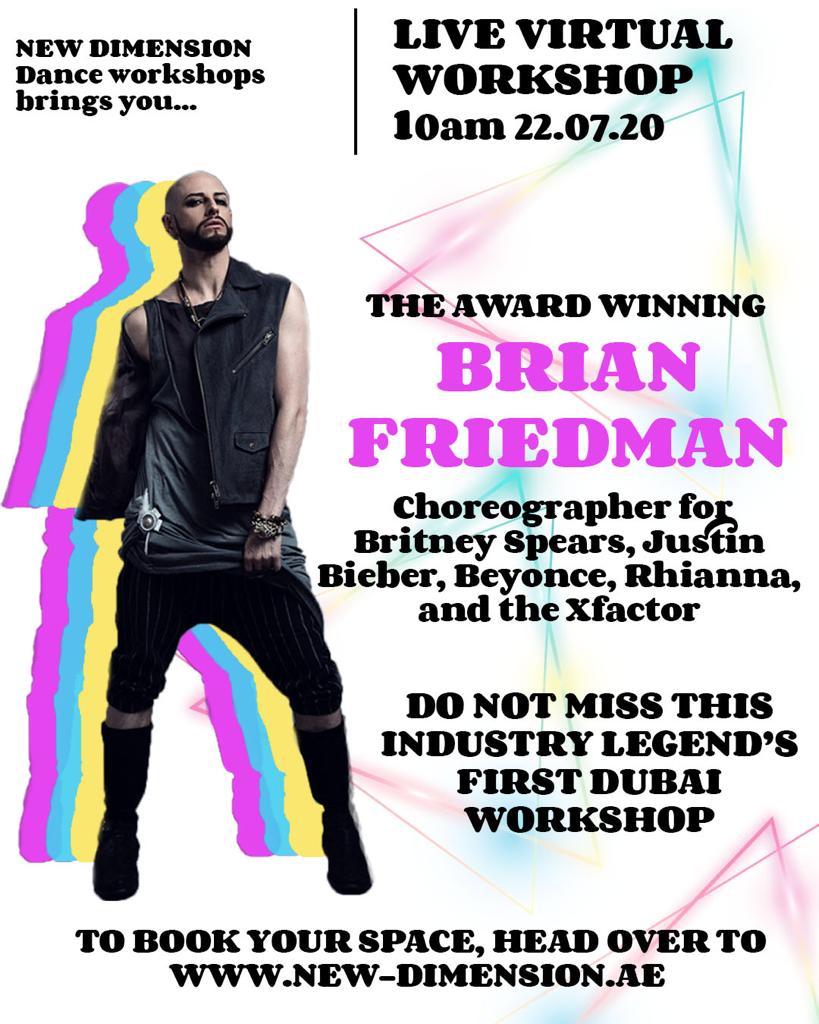